After my parents got married in 1986 we moved to the projects, Cardinal Village, on the southside of Danville.  Since birth I had always lived with my grandparents in the Camp Grove community so moving across town was new to me.  I still stayed in Camp Grove a lot but some weekends I had to stay home.  It was so boring being away from all of my friends then one day a moving truck pulled up.  This family of four moved in the apartment across from us.  I noticed the children of the couple were teenagers.  I was in awe of their style.  I thought they were so fly.

The following day the lady of the house came over to introduce herself.  Her name was Mattie Jackson.  Once my mom told her who her family was she said, girl don't you know you my cousin.  By this time I was staring the lady down because she looked like she could be my mother.  There I was no more than 8 years old and I was shocked at how much she looked like so many other family members I knew.  I was too young to understand the connection but all I knew was I had some kin people who favored me.  I used to watch her children Tasha and TJ everyday, watch them dance, and just play around and have fun.  They moved here from NY, Mattie was from here.  One day I even saw David Wilson come over to Mattie's house.  I knew he was kin because we attended the same church, Camp Grove Baptist Church.  My grandpa was 'everybody cousin' so I knew everyone I was related to in church.

Once my interest in genealogy peeked, everyone that my grandfather told me was connected to me I just had to know.  I wanted to know exactly how I was kin to all of these people.  What I found was an amazing web of double kinship, endless connections, and a lot of intermarrying.

I followed Mattie until I found a connection.  Mattie Louise Wilson was born to Woodrow Benjamin Wilson (abt 1916) and Louise Constance-Luella McDaniels.  Woodrow and Louise were married on September 21, 1935.  I followed Woodrow Wilson all the way back to his great grandfather Jack Wilson (abt 1794).  Jack Wilson married a Matilda (abt 1814).  They had four children, John, Minty, Logan, and Indiana.  Their son John Wilson (abt 1848) married Emeline Bailey on December 27, 1870.  To this union, eight children were born.  John & Emeline had a son named Ben Wilson ( April 22, 1879).

Once I got that far, I found the connection along with many others.  Ben Wilson married Caroline Turner.  Caroline Turner (December 3, 1883 - October 1963) was the daughter of Robert Turner (abt 1848) and Lucy Luck (abt 1854).  Lucy Luck was one of 6 children born to my 3rd great grandparents Gardner & Paulina Luck.  Once I found that connection I realized that the descendants of Gardner Luck is probably over half of the people in Danville.

Below is a picture of Ben Wilson & Caroline Turner~ 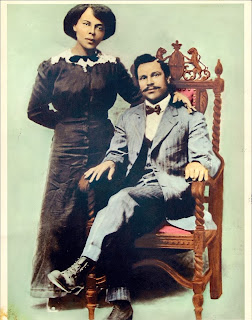 Since I have been interviewing my grandfather's first cousins I am learning so much about my 2nd great grandmother Ella.  After all she is their grandmother.  It just amazes me at how her grandchildren all in their 80's and 90's can still vividly recall her.  Just recently I was speaking with Audrey McLaughlin Harris, my grandfathers 1st cousin, and I asked her to tell me some Grandma Ella stories that actually were related to me.  She started to tell me stories of my great grandfather James Ollie Luck, Sr. (1/6/1892 - 3/1965) and my great grandmother Maude Elliott Luck (abt. 1901 - 3/11/1928).  My great grandfather, Uncle Teetney to Audrey, said that he was always a lovable man that always seemed to carry the weight of the world upon his shoulders.

When my great grandfather James married my great grandmother Maude Elliott, his mother Ella disowned him.  She said, you and yo pappy must love them "Elliott" women....yo pappy done ran off and done had a baby with Martha Ann and now you taking up with Martha Ann's daughter.  That really strained their relationship.  So as it stands, and I am hoping not to confuse you all, but my grandfathers's grandpa on his dad side had an affair with his grandma on his mother's side and they had a child.  So Aunt Edna was my double aunt.

Aunt Edna always knew she was a Luck even though she called Grant Elliott dad.  My cousin Audrey said the whole family knew it too.  She recalled a story that happened when she was a little girl.  She said that Aunt Edna would visit her mom almost everyday and they would laugh and talk.  She said her mother Ruby never acknowledged her as her half sister but one day Aunt Edna started laughing, and Ruby said, Edna don't you know when you throw your head back like that you look just like Papa.  That was her way of letting her know that she knew their connection.  From that moment Audrey called her Aunt Edna instead of Ms Edna.  My Aunt Edna is my double great great aunt and although she passed away when I was a little girl I remember her sitting on the porch.  I expressed interest in her old home in the Camp Grove community because of sentimental value.  My mother purchased it for $3,000.  My Aunt Edna was the first black midwife in Danville, VA.

My Grandma Ella didn't fool with my grandfather and his siblings, partly because they were dark, and secondly they were also the grandchildren of the woman she despised most Martha Ann Elliott.  Funny how they ended up being grandparents to the same set of children.  My great grandmother Maude, Martha Ann's daughter died when she was 27 years old.  She passed away 11 days after giving birth to my grandfather Bedford.  My great grandfather James went into deep depression having lost his wife and having to raise four young boys alone.  He eventually had to go to the insane asylum.  Audrey said her grandmother shed a tear or two but didn't have much reaction.  Those tears were probably shed because of how she had treated her son, simply because of whom he chose to marry.  As I said before, I am really starting to understand her.  However this lady was a piece of work.  How she was as a person had a lot of influence on her offspring through out their lives.  For example, when I was born my grandfather hollered out, I finally got me one, a pretty red baby.  As I am the lightest grandchild.  So as some things change, some things remain the same ~

I found this link to an old wanted ad published in 1950, Aunt Edna Tiller posted ads in the paper for her services: http://www.newspapers.com/newspage/45732612/

Attached is a photo of James "teetney" Luck my great grandfather and the taller light skin man is his brother my great great Uncle Frank.  Take note one is darkskin and the other is light...children of Ella:) 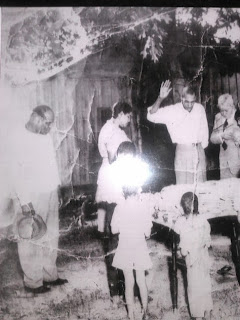 My Grandma Ella, her story is like so many others born around the time of emancipation.  She was my great great grandmother.  She was born Ella Farrish about 1865 in Caswell County, NC.  She was the daughter of a biracial mother Lucy Farrish.  According to the oral history in the Luck family Ella's father was the slaveowner named Tom Farrish.  That has yet to be proven however in my spirit I feel that it is true and I hope one day I will find some type of documentation to prove the oral history.  I have interviewed several of my grandfather's first cousins.  One who is dear to my heart Audrey McLaughlin Harris.  She is 85 and so sharp.  I am in awe of her memory.  She has been a yoga instructor for over 35 years and has celebrity clients, and doesn't look a day over 65.  As I type this I am awaiting a picture of Grandma Ella from her that I hope to post soon.  This was her grandmother and she can recall her vividly.  Listening to her stories they actually mimicked those of my own grandfather.

Grandma Ella was very fair skinned and simply looked white.  She walked barefoot all the time even in the winter.  She also wore a long over coat even when it was warm. Her hair was thick and came down to her butt.  She wore it in two long braids hanging down on the side.  As I picture her, it makes me chuckle. A strange woman nonetheless but to them she was simply, "Grandma Ella".  Grandma Ella had no shame in telling her children and grandchildren her story.  She said she was around the age of 14 and her mother had passed away.  She was sent to an orphanage and was mistreated horribly.  She ran away, not knowing where she would go but she knew anywhere was better than that.  As the story goes my great great grandfather Benjamin Luck found her in a ditch somewhere.  He was close to 30.  He took her home, fed her, married her, had at least 14 kids by her and treated her like dirt.  She described how she would be giving birth alone while she had a baby crawling around on the floor and toddlers running around.  She would tell her children that she jumped from the frying pan straight into the fire.  But what could she do.

My Grandma Ella was practically a white woman and she acted as such.  To see her out with Ben Luck had to be a site.  Ben Luck was a big muscular man with dark features and over 6 feet tall.  She was small and petite.  She was so small my great great Uncle Frank Luck who was her baby boy nicknamed her Short Toe.  She had a black set of kids and a white set.  Some of them looked exactly like their father skin tone and all and the other half looked no different from any other white person you will pass on the street.  For example my great grandfather was dark skin and his brother the aforementioned Frank Luck was very fair skin.  My Grandma Ella hated dark skin people.  All of her light skin grandchildren were welcome but the darker ones would get stopped at the door.  My grandfather told me the first thing that would come out of her mouth was, "y'll better get y'll black ass away from here".  She also told her daughters to never marry a black man and to marry light if they couldn't help it to keep the bloodline strong.  Audrey told me how her mother Ruby (1905) who was the baby girl married a man because her mother approved as he looked like a white man.  His name was Moody McLaughlin.  When I was a young girl I had the pleasure of meeting those two.  And yes I could tell the difference.

When I used to hear those stories about her early on from my grandfather I would cringe.  However the more I learned about Grandma Ella I am starting to understand her.  You never know what type of things people have to endure and go through in life that shapes them into the person that they become.

The last time I spoke with cousin Audrey she told me that Grandma Ella supposed father Tom Farrish left her some land. Tom Farrish is supposedly the white slave owner. I don't have anything to prove it yet.  However she said Ben Luck wouldn't let her take it.  I'm pretty sure I'll be writing more about Grandma Ella in the future.  My next interview will take place with Nora Luck Thornhill.  She is the granddaughter of Ella and is 93 years old.  She says she has plenty of Ella stories, as she shares with me I will share with you all.  Happy New Year 2014....peace & blessings~

John 3: 1-2 Beloved, I wish above all things that thou mayest prosper and be in health, even as thy soul prospereth